Believing in the stars and the space between them

On humanity, hope(lessness), and faith in Night in the Woods, and what it means to believe—in something, at least.

I've been trying to write an article about Night in the Woods for quite some time, ever since I became enamored with the game when I saw its autumnally-decorated PlayStation booth at E3 in the summer of 2014. Earlier this year, Alec Holowka, Scott Benson, and Bethany Hockenberry (together known as Infinite Fall) showed off a second, slightly-more jarring trailer—and, just one month ago in late February, finished development and released the game.

In the three years between the original October 2013 Kickstarter and now, Infinite Fall released two smaller "supplemental games" which take place in the same universe as Night in the Woods (NITW). The first, Longest Night, a nostalgic dream of constellation-finding and storytelling around a campfire, and the second, Lost Constellation, a ghost story about an astronomer traveling through the woods of the Forest God, touch on themes similar to those of the full game. All of these games and stories come from a deep place and explore important and personal, yet oftentimes universal, topics. NITW looks at decaying towns and economic hardships, depression and mental health, growing up, making one's way through the world, and finding a purpose and meaning in life. It explores faith and belief, and having faith in people—and examines what that means. 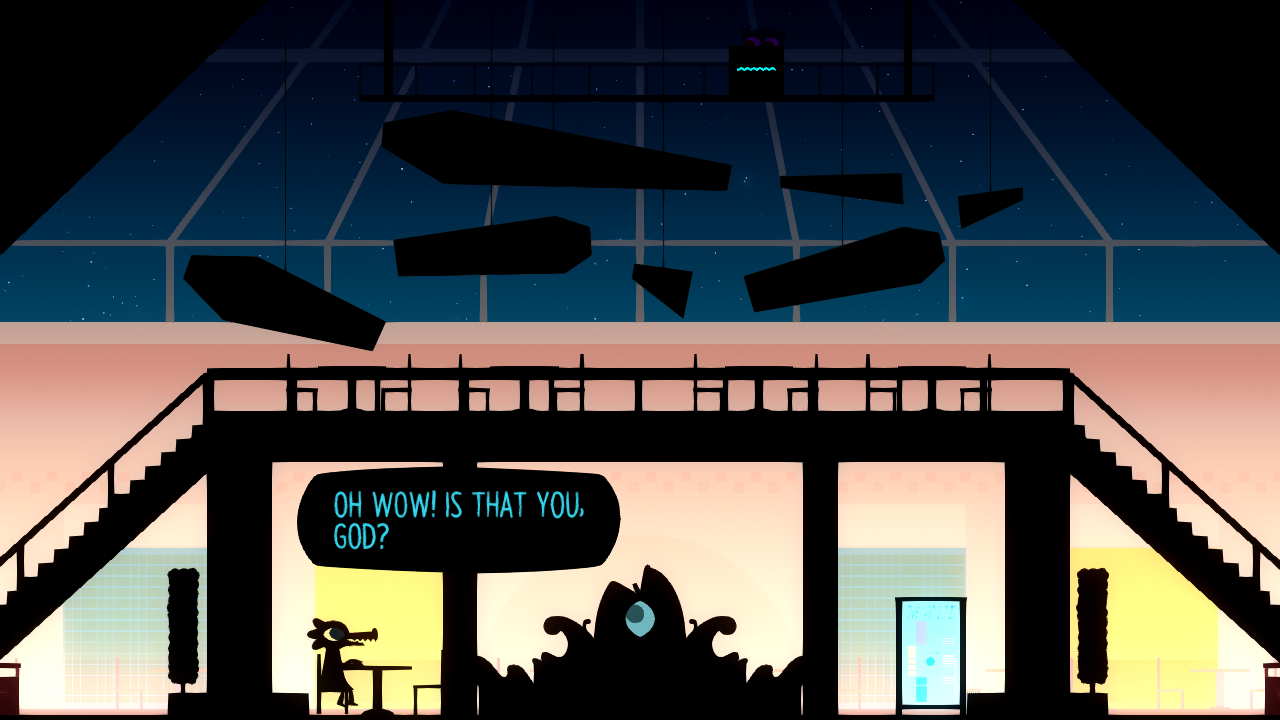 There are many, many reasons why I love NITW—its stunning and inspiring writing, its sharp and poignant humor, its fantastic, funny, narratively-rich characters, its moving soundtrack—but when I tell people it's a good game, I'm appealing to that it will (and has) helped people and improved peoples' lives. The story of NITW and its style of presentation resonate with people deep down. It's something special, in that regard—beyond just the fact it took me from simultaneously crying with sadness and joy to laughing my head off in under two minutes.

NITW explores the complex themes of religion and faith in an interesting way. I'm not particularly religious myself, but I am interested in how religion can help us understand and make sense of our world, and how it can provide a sense of grounding and hope for many. Scenes and conversations involving these themes are abundant throughout the story—Mae's mom works at the Church of the First Coalescence in Possum Springs; Mae talks with whom she believes to be God in a dream; characters discuss the nature of gods, if one exists, and their beliefs or lack thereof. 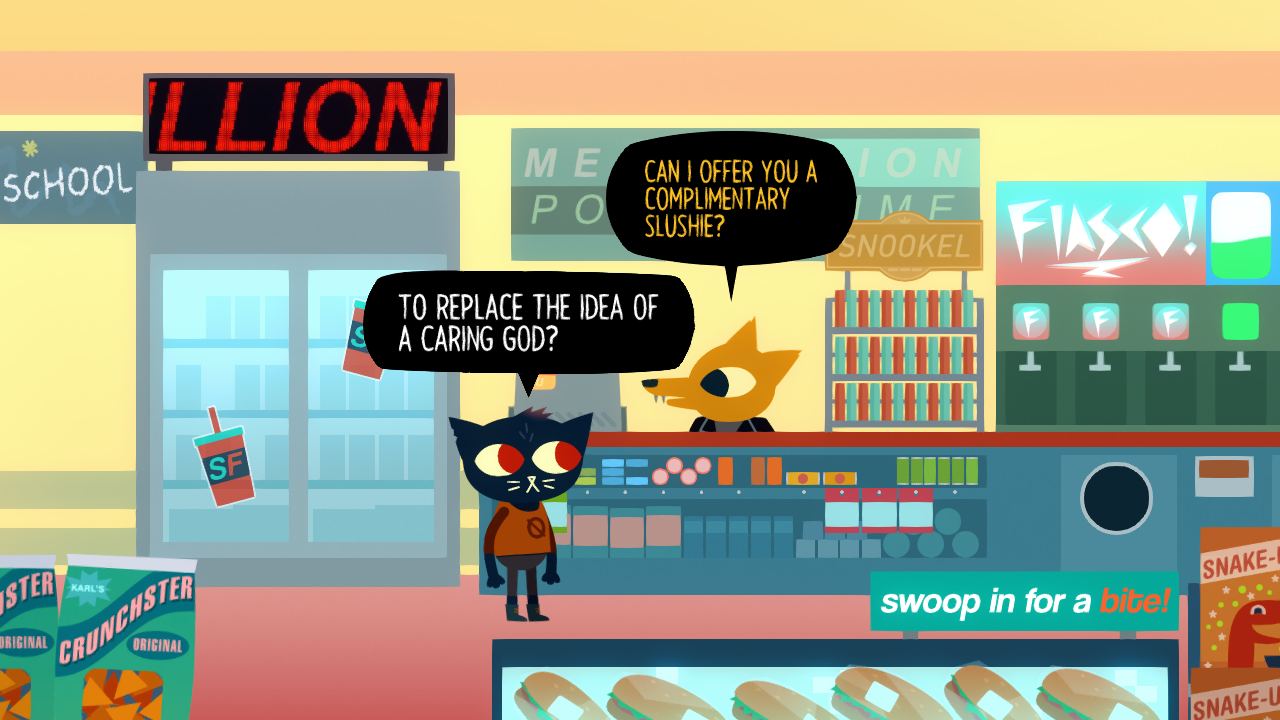 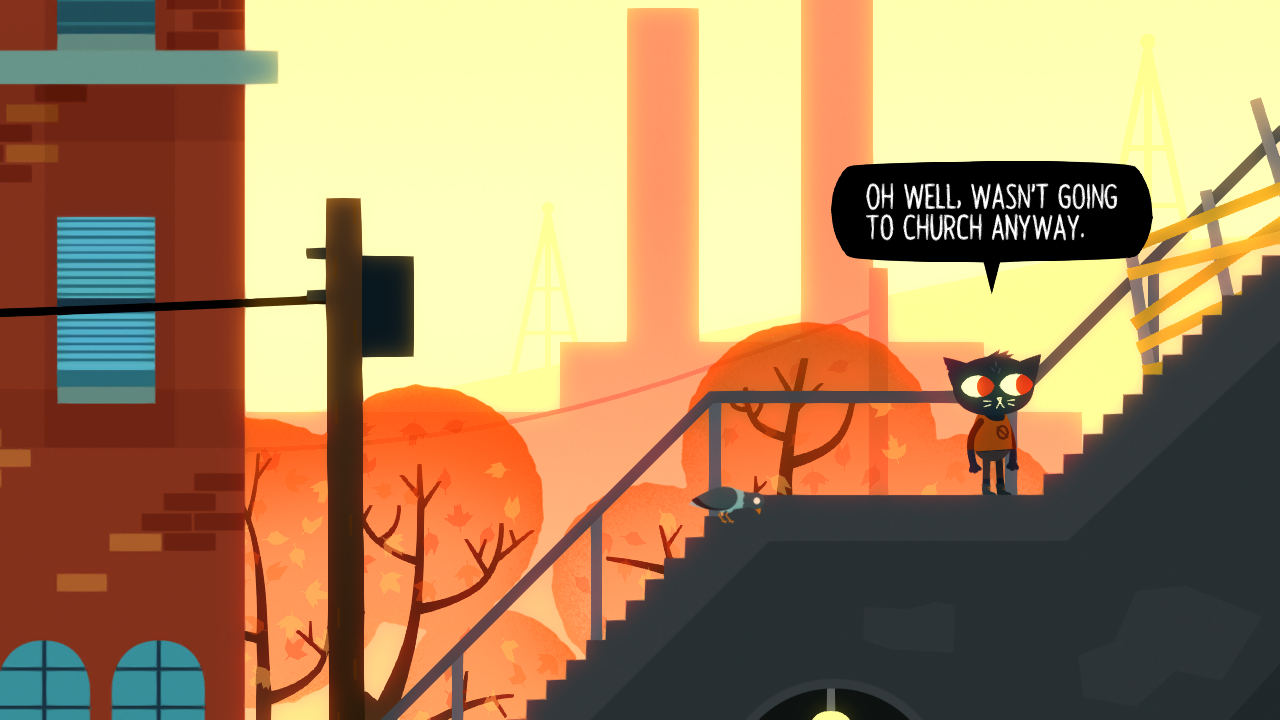 In a pivotal scene (while finding constellations together in the sky and telling stories about them) Mae, the main character, asks Angus, her friend Gregg's boyfriend, if he believes in ghosts, to which he replies he doesn't. He says he doesn't believe in ghosts, or gods, or psychic powers, or anything in that vein, and arrived at that belief largely due to the abuse he suffered throughout his childhood. Beaten by his dad, and starved and locked in the pantry by his mom, Angus tried to develop psychic powers to signal the neighbors or unlock the door. But it didn't work—"as you might guess," he says—and Angus was led to his belief in an absent or uncaring god. Mae asks about this—rather than somehow finding God, don't people in seemingly hopeless situations at times feel like God finds them, and provides them hope? Angus says no. He was alone in the pantry; God never found him.

So while Angus didn't believe in God—in a capital-G god, or a sentient being in the sky, or even in a caring universe—he soon met and fell in love with Gregg; Angus believes in people who care, and this serves as his God. In such a helpless situation Mae says she'd be more likely to want to believe in God, or at least in something—some semblance of life and hope. She asks Angus, "Do you believe in anything at all?" Looking to the stars, Angus replies that he doesn't actually believe there's a whale out there in the sky. None of the constellations actually exist. In our uncaring universe, "the stars can stay up there and not give a shit about us." But, he says, the stars themselves do exist, and it is people who told stories and put the whale there, brought it into existence, and gave it meaning. What Angus believes in is people. 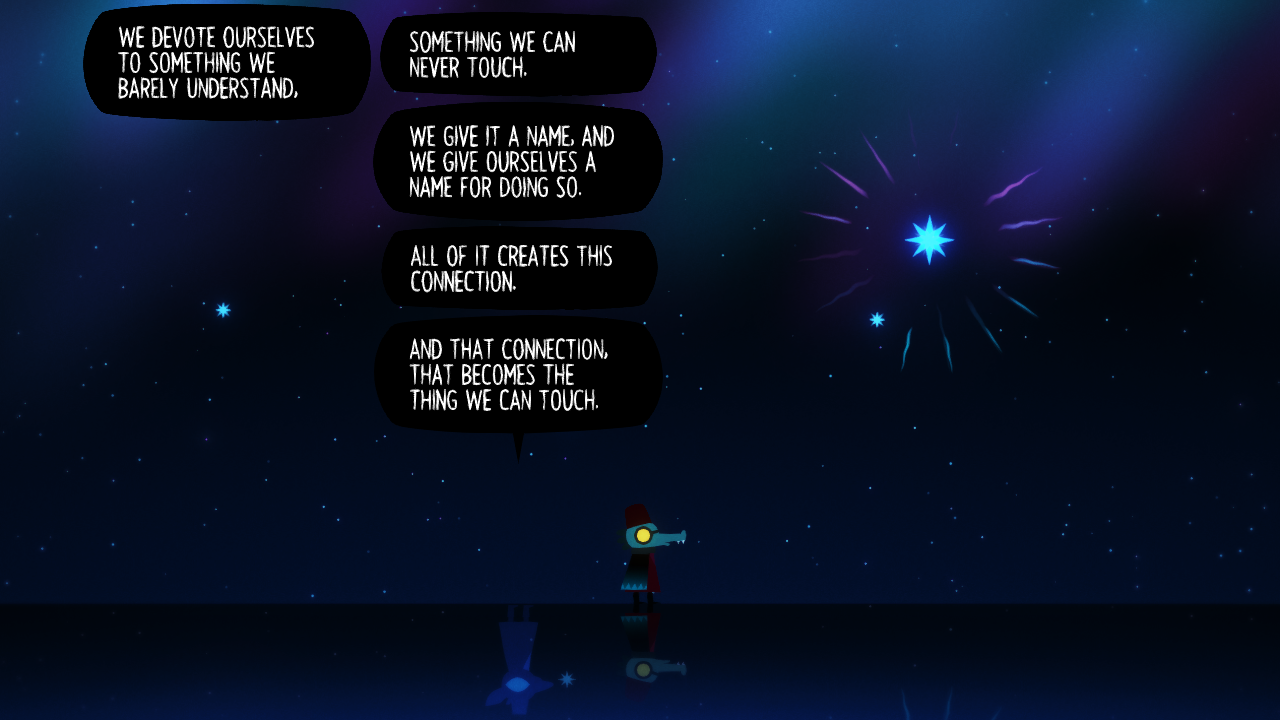 Throughout the story, multiple characters mention Angus' belief that we are pattern-finders—that no matter what, people will seek out patterns and look for meaning in the world around them. In talking with Mae, Angus says that finding and recognizing patterns is something we're extremely good at and dedicated to, and something we put all our heart, mind, and soul into, even if we don't necessarily intend to. And it helps us survive. "So," says Angus, "I believe in a universe that doesn't care… and people who do."

Carrying this belief with him in his life, Angus cares deeply about people and has a strong devotion to his boyfriend Gregg and to his friends. When a despondent Mae asks the group to come along at a late hour to find the "ghost" she believes is following her, Gregg and Bea are skeptical, saying ghosts don't exist and that she's likely just stressed; Mae says that in that case, she'll just go alone. But after a pause, Angus speaks: "I'll go." "Listen," he says, "I don't believe in ghosts. But I believe in you. So let's go find your ghost." 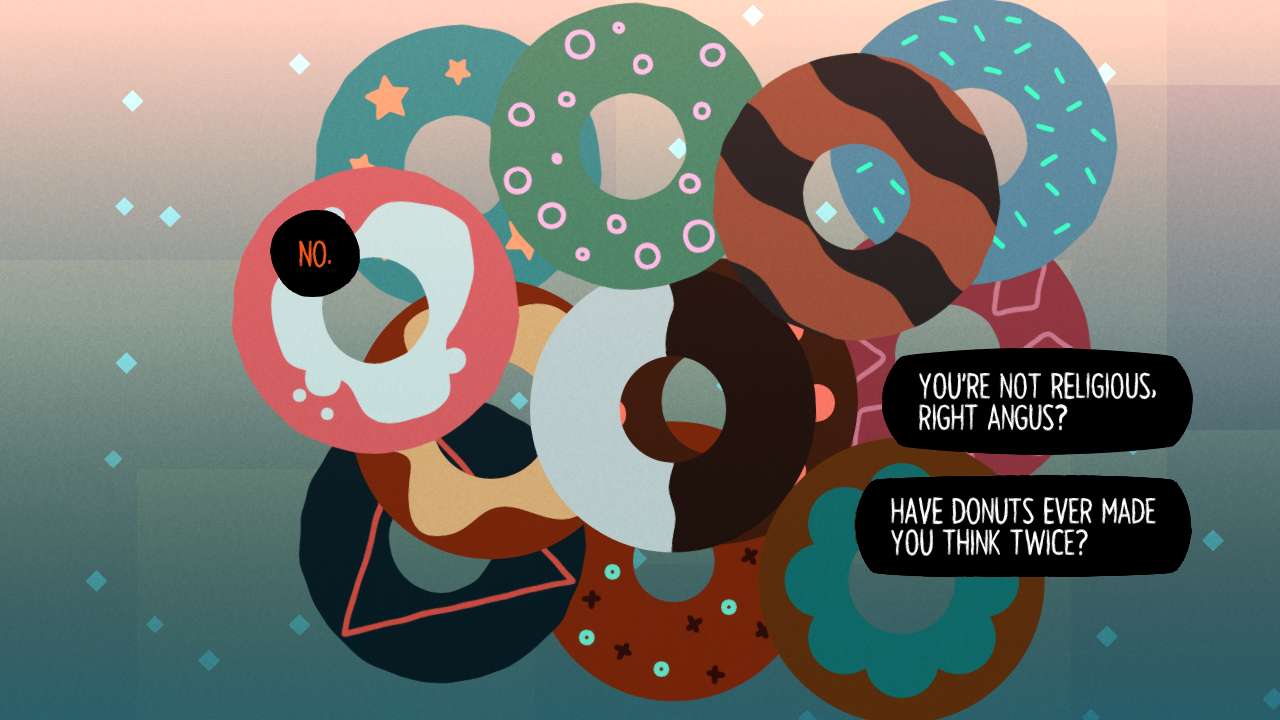 We see "stand-ins" or alternatives to the traditional concept of God throughout the story of NITW. Visiting the abandoned Fort Lucenne Mall, Bea recalls that when she was younger she thought God existed in the atrium above the water fountain, controlling its water jets. As a child, she didn't understand the workings of it, and associated that with a concept of a god, high up in the sky, or in the atrium. "Not knowing how something worked used to seem like... magic," she tells Mae. "Now not knowing means it might be going wrong and I may not be able to fix it. Helped knowing someone was at the controls, you know?"

Even Mr. Chazokov, the astronomer and teacher who searches for dusk stars on his roof, tells Mae that "Gods in these stories [about the constellations] are only stand-ins for things we cannot control." And whether that is in the stories and gods in NITW, or those in our own life, his statement rings universally true. 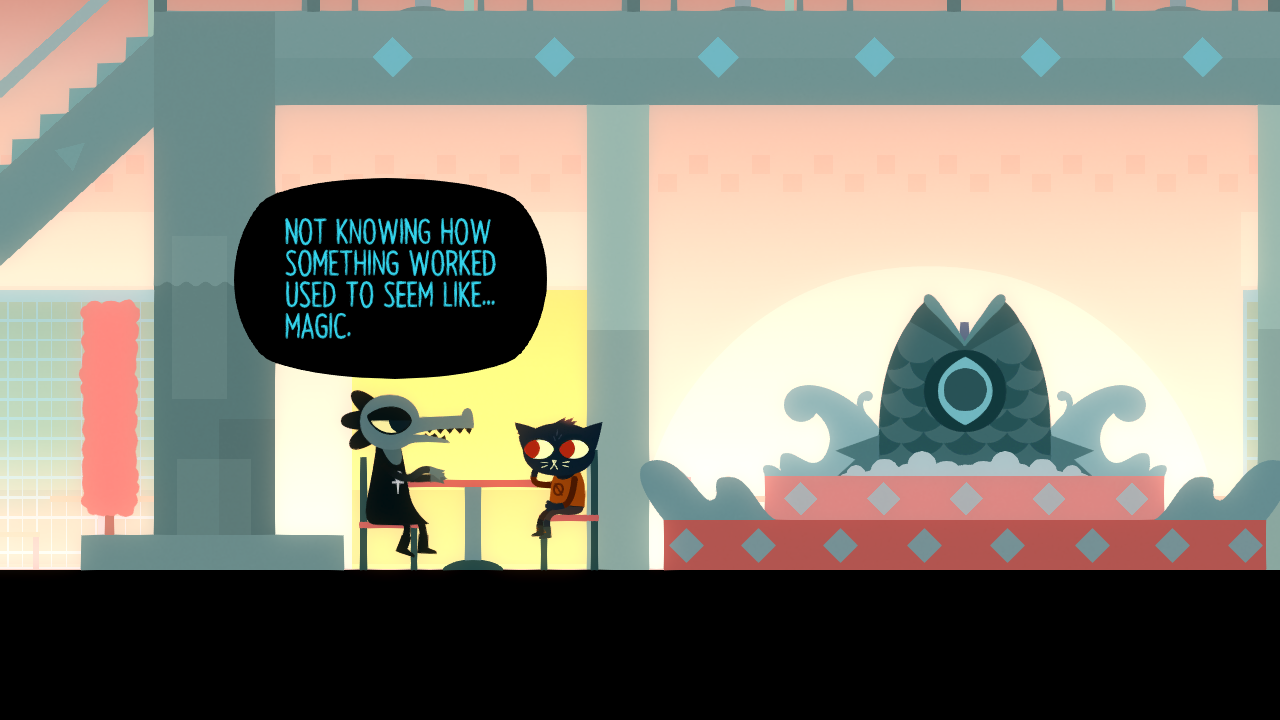 God can mean many different things to different people, and can exist for us in different times and places. For some, God can exist in atriums of malls.… or in pantry closets, and for others, in people.

However, our concept of "God" isn't actually god. Mae discusses this discrepancy in a conversation with Pastor Karen—the word "God" or our concept of god isn't truly what "god" is, but just the name or label we use to describe this concept. To again quote from the end of Lost Constellation: 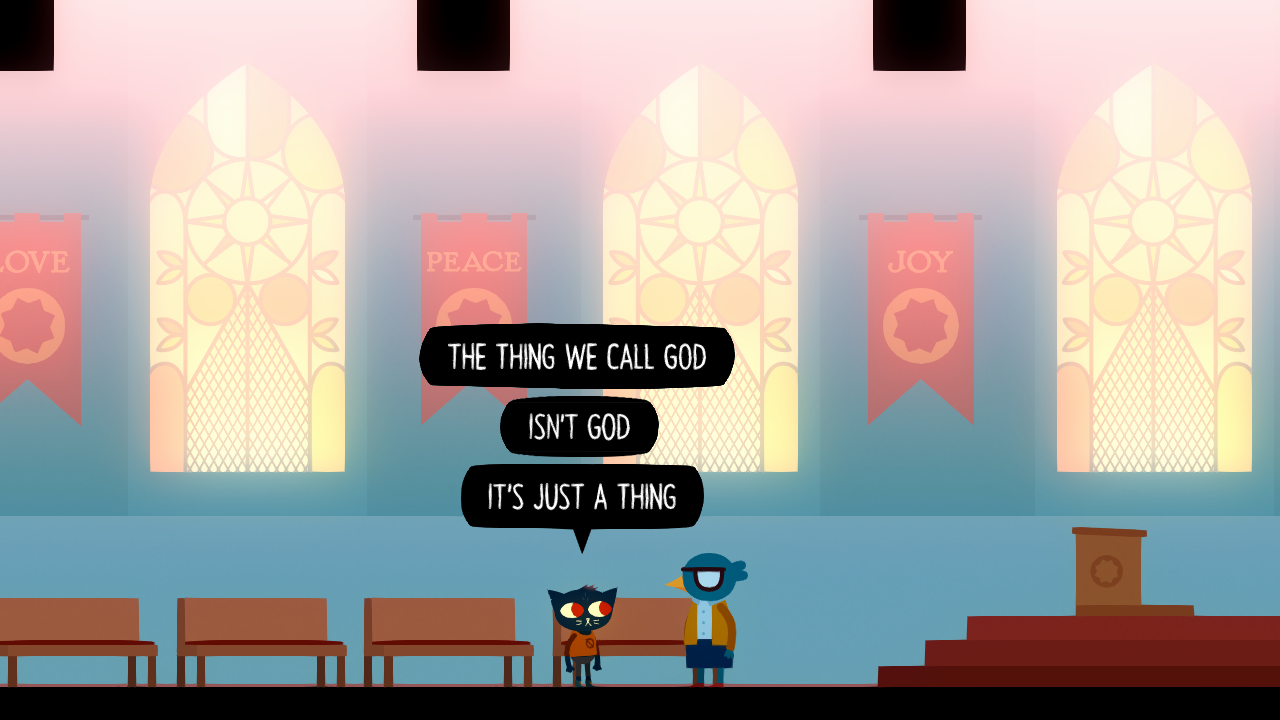 Mae struggles with a deep-down loneliness, and her story in-game involves her running around somewhat aimlessly, reconnecting with her old friends… but still feeling a bit lost inside. Within, she's tortured by how she views everything as just pieces, shapes, atoms, without any connectedness or meaning, leading her to almost kill someone years back in a frenzy of fear and anger. But in the end, Mae's friendships, interactions, and conversations with others—from hanging out daily with her closest friends to random encounters with mysterious goth teens—help save her, or at least help to show her that someone cares. Just as human stories connect the stars into constellations, human connections are what give us the ability to keep holding on.

Mae: When I felt like everything was over, like there was no hope, remembering like… ghost stars and Adina and teen witches and Lori making monsters out of toy people and real trains… just suddenly felt like life was happening. And teens were doing weird magic. So things couldn’t be that hopeless.
Bea: This is like those inspirational stories religious people put in books and, like, old people read them—about how angels, like, stopped a car from hitting them, or sold them a house for almost no money. Except your angels are teen dipshits.
Mae: You work with what you have I guess.

As Mae searches for meaning in the world, she's driven to act out. To do something. Anything. This aimless, sometimes violent and seemingly-hopeless act of searching for meaning—it's why she suddenly attacked Andy Cullen with a baseball bat years back, why she destroys the bathroom in Donut Wolf, and is the same reason why 14-year-old, anxiety-ridden Lori M. is driven to graffiti the historic mural in the subway tunnel.

Lori: This entire place is royally messed up! And nobody cares! I wanted someone to notice things aren't OK. This town is like a horror movie that never stops—and it’s not even a good one!
Mae: Yeah, it might suck! But it’s our horror movie. And that's kind of cool, right?
Lori: But…
Mae: Yeah. I know. I have the same thing inside of me.
Lori: The thing.
Mae: The thing.
Lori: I feel like no one cares. Everything just… sucks forever.
Lori: There's this thing coming for us, happening to us—
Mae: Yeah, but, like—this isn't advice I'm good at taking, but—sometimes things are big enough and bad enough that they're unkillable. But, ya know, life goes on.
Lori: Yeah. That's not really comforting.
Mae: Heh heh. Well, I'm still working out a better pep talk for myself too.
Lori: Ha ha ha. Fair enough.

What Mae seems to be expressing, even if she doesn't fully realize it, is that there's always something there for us—even in the most desperate times, and whether or not we know it. It's a story of finding meaning and grounding in a world that's denying you that, and a story of survival. And that's the message I take away from Night in the Woods.

As the game's description says: "At the end of everything, hold on to anything."